When architect Neel Reid died in 1926, Philip Shulze completed the design of a mansion inspired by the Scoleua dei Tiraoro e Battioro, Venice. Its parlor is considered “the finest example of the Italian Baroque in the Western Hemisphere.” Especially notewothy are the 18th-century European hunt scenes that fill its walls. They were procured in the 1940s to cover years of water damage, but the room’s enormity made additional panels necessary. Those, regretably, were crudely done.

Shutze had designed a large cherry cabinet for the space, and when the current homeowner moved it, a blank area was revealed. To accommodate lighting sconces, the focal point of the hunt -a wounded boar- had been cut in half straight through the eye. I was tasked with creating the missing panel 10 complete the narrative. The original paintings are allegedly tapestry cartoons, executed in casein on raw herringbone-weave linen, each panel comprised of a series of narrow horizontal bands, hand-sewn on the back.

I found matching linen, and a drapery workroom laboriously hand-stitched these strips together. I made a full-scale pounce, adding elements from other parts of the original and transferred that drawing directly to the new cloth. The antique series had not been installed entirely in sequence; in fact, one panel which originally adjoined the boar is on the opposite wall, so composing the new panel was like completing a jigsaw puzzle with many invented puzzle pieces. My design restores the other half of the boar that had disappeared behind the cabinet. l carefully matched the original palette, painting it in Renaissance tapestry style and ageing it with theatrical trickery, making it nearly impossible to distinguish between old and new. ln the future, I hope to replace the remaining 1940s panels in the same manner, bringing stylistic coherence to this rare find. 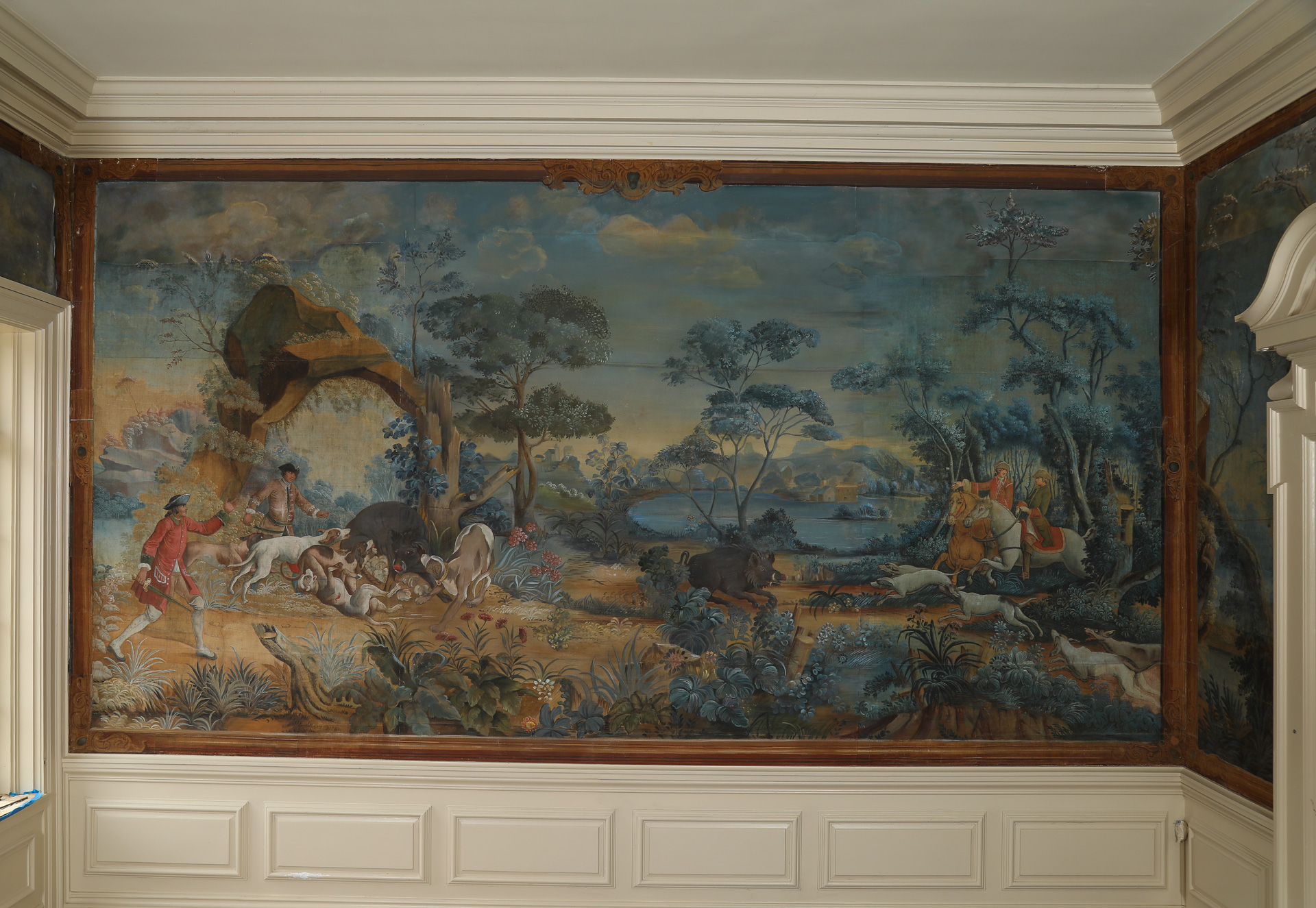 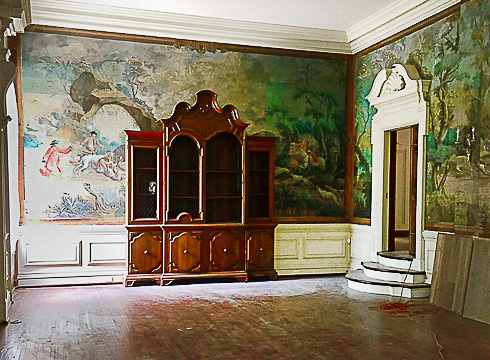 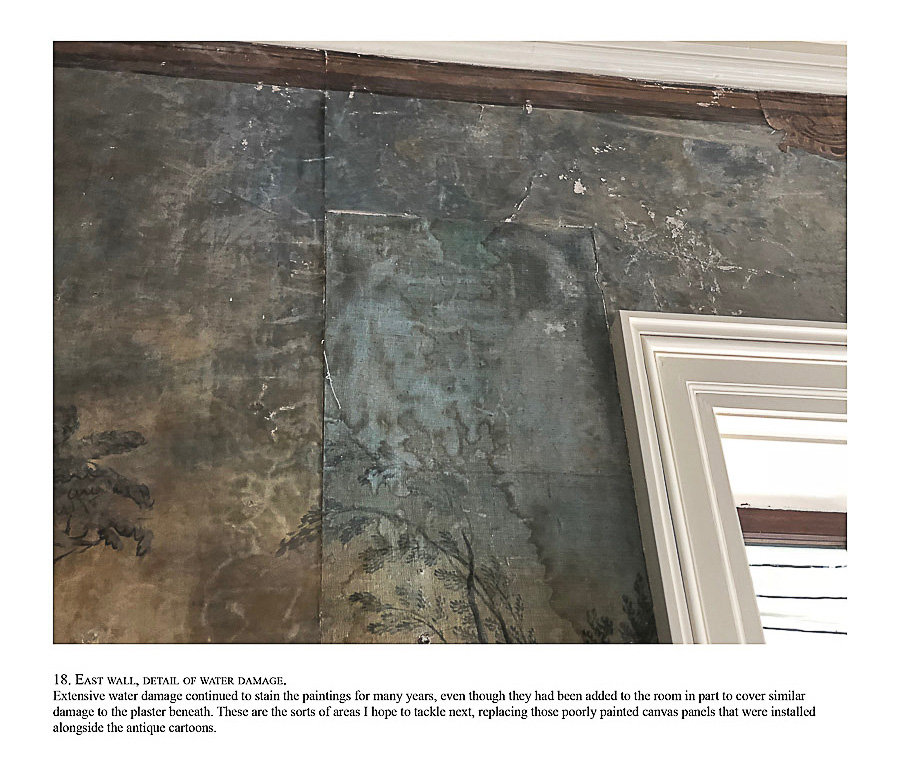 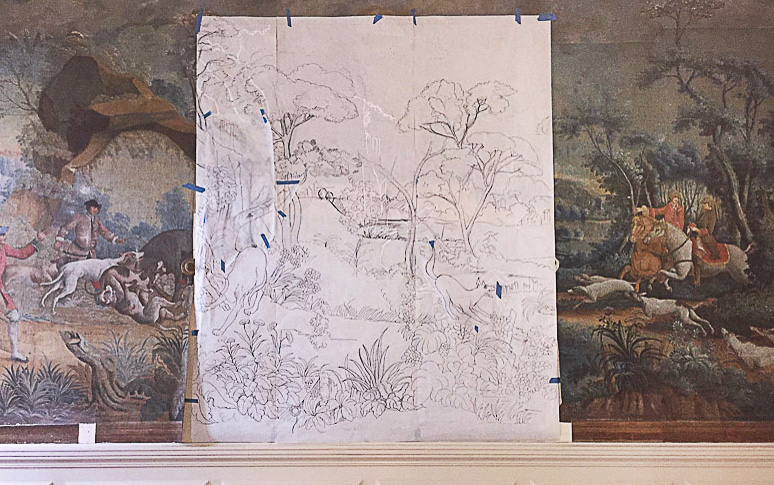 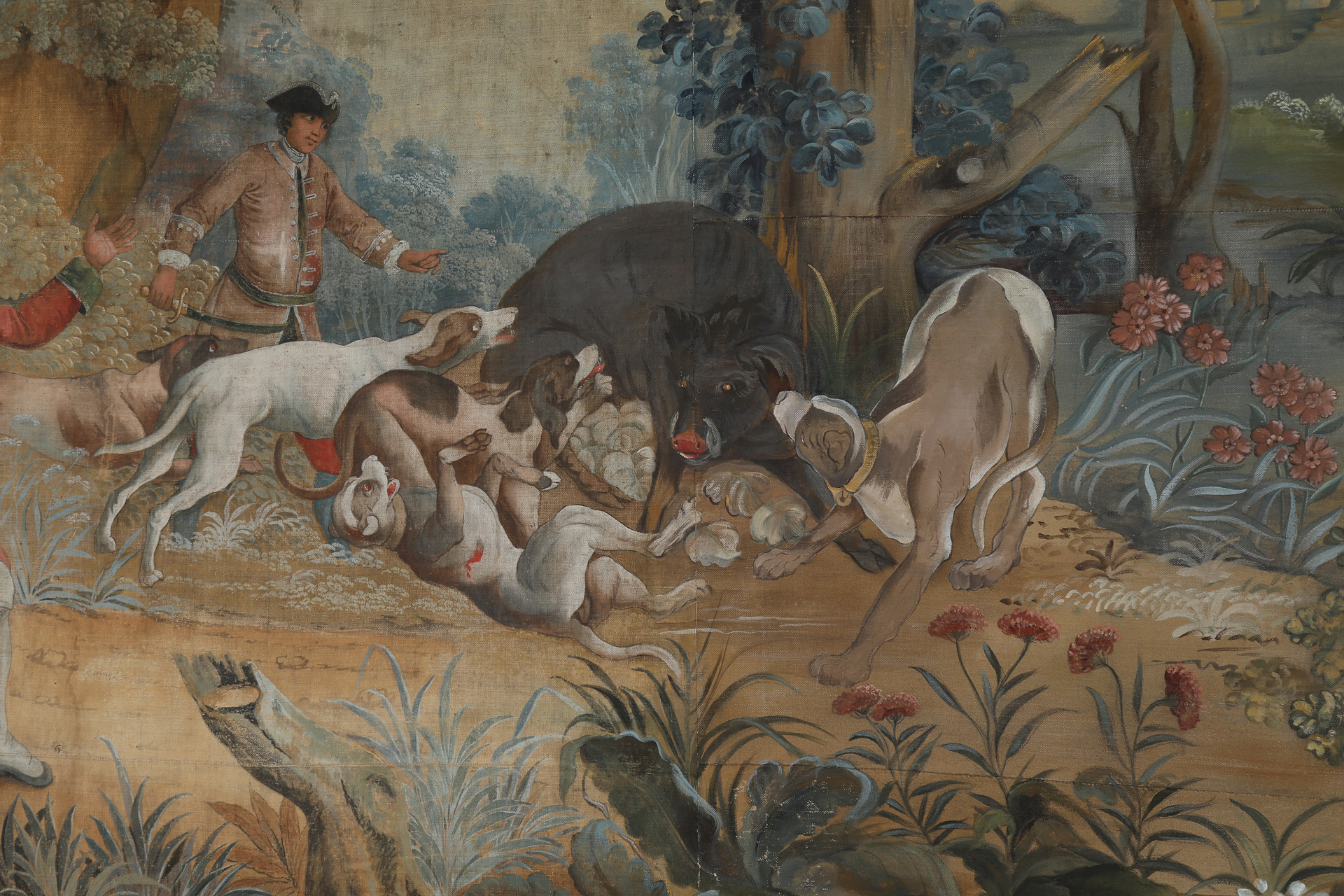 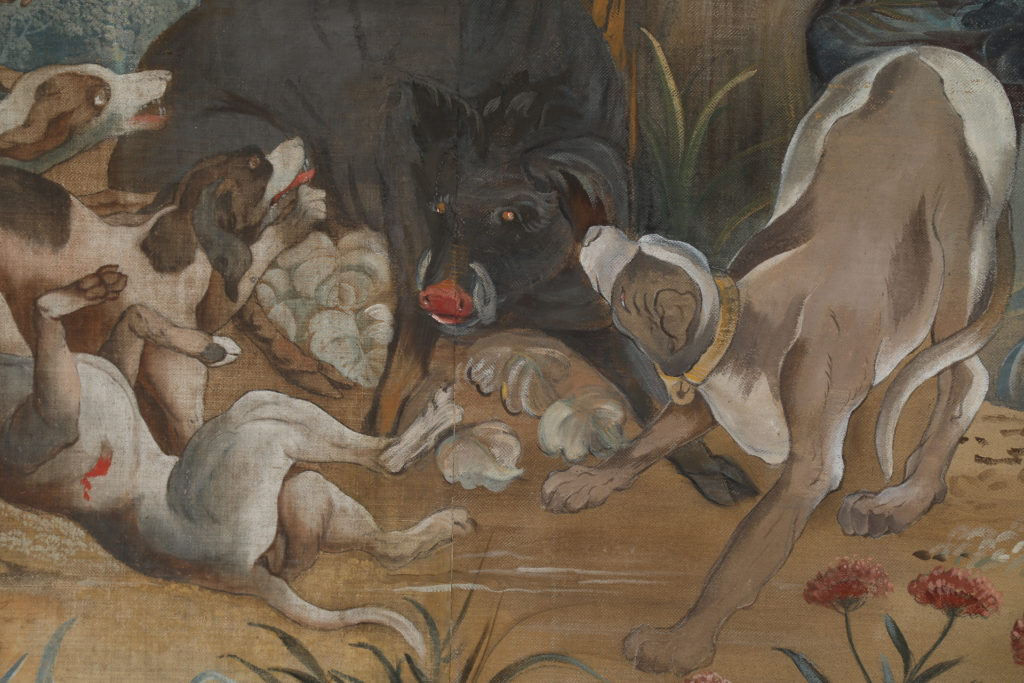 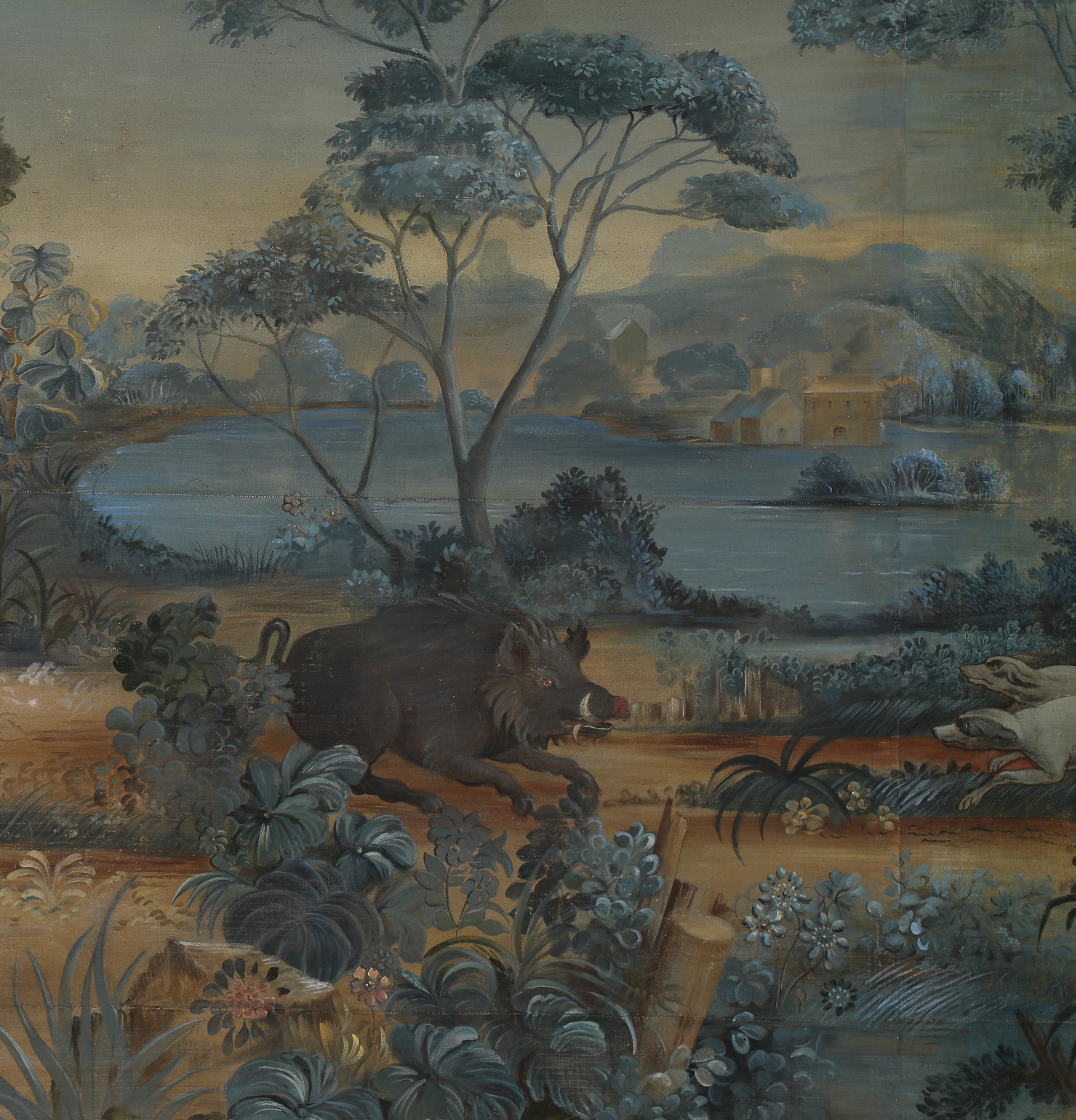 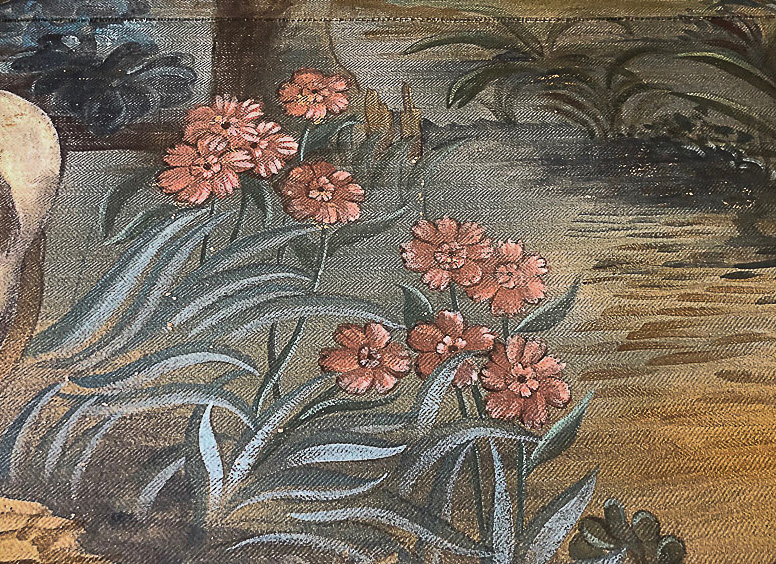